In this post I’m demonstrating how to create a high-speed macos volume using quantity 2 Thunderbolt ports and NVMe enclosures. This solution uses RAID-0 (striping) so the failure threshold is more than twice that of a normal standalone disk. This example is for demonstration purposes and could be useful for video editing scratch space, rendering, large photo sessions or similar uses. Obviously, good backups (RAID is not a backup) or a more reliable storage tier is recommended for daily use. 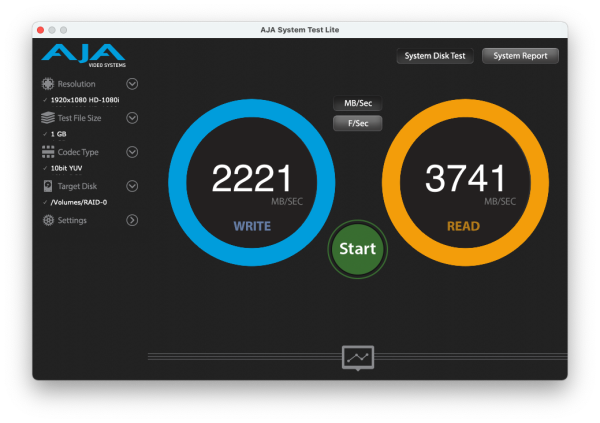 With that out of the way, I’m using two aVolution Thunderbolt 3 NVMe disk enlosures, each with an active 2m Thunderbolt 4 cable. I typically use shorter cables for things like this, but part of what I’d like to demonstrate that using an active TB4 cable of decent length doesn’t degrade performance. These cables are more expensive but they come with Thunderbolt 4 comfort.

NOTE: This configuration likely will not work in an M1 Macbook Air or M1 Macbook Pro, unless a powered Thunderbolt Hub is used. The two disks and enclosures will draw more power than the M1 MBA or 13” M1 MBP can provide while on battery because there are only 2 Thunderbolt ports and those laptops get power over a USB-C Charging cable. On battery power with no charger plugged in you will likely get an error message: Not enough power for this accessory..

Here’s what I found:

I really like these enclosures. They’re a bit pricey but worth it in my opinion and over time, I expect Thunderbolt accessories to become more affordable. The performance of just one is vastly superior to USB3 and I haven’t found any USB4 equivalents yet. If you know of any, let me know in the comments below. 👇